UK FREE DELIVERY ON ORDERS OVER £50

The Story of Valentine’s Day

Valentine's Day is one of the most romantic days of the year to spread the love to friends, family and lovers. Our Fairtrade Loveheart Collection is particularly special as the gold is ethically mined and makes a big difference to the lives of the miners, their families and communities. But where did this day of showing our love and affection come from? This month we thought it would be fun to find out more about the story of Valentine's Day. THE LEGENDS SURROUNDING ST. VALENTINE
On hearing two lovers quarreling Valentine gave them a rose. He asked them to hold it in between their hands but to avoid pricking themselves. Sometime later they returned to him and asked him to marry them. A variation of this tale tells us he made pairs of pigeons circle the lovers. As they flew they exchanged gestures of affection inspiring love in the couple.
One legend has it that Emperor Claudius II believed single men made for better soldiers. He outlawed marriage for young men. Valentine saw this as cruel and unfair and married young couples in secret. According to some, Valentine gave the newly-weds hearts cut from parchment. Is this why hearts symbolise Valentine's Day?
Another legend finds Valentine sentenced to death. Awaiting execution he heals Julia, the blind daughter of his jailer, Asterius. One variation of this legend has him fall in love with Julia and write her a letter signed "From Your Valentine." If true this letter is the first recorded Valentine's message...

VALENTINE'S DAY AND LOVE
In the Middle Ages Valentine's Day became associated with romance rather than lust.
It is possible Geoffrey Chaucer first made the connection. In 1382 he wrote a poem celebrating the engagement of Richard II of England to Anne of Bohemia.
In it, he refers to the birds coming together to find a mate on February 14th. And with this it seems that he invented Valentine's Day as we know it. 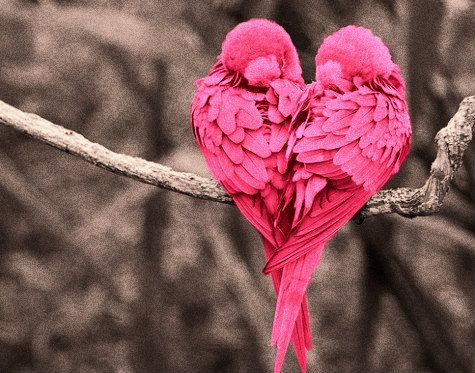 MODERN VALENTINES
By the 1800's exchanging hand-made cards between lovers had become commonplace. Printing technology was flourishing. This and the invention of the stamp in 1840 made sending cards cheaper than ever. The stamp also allowed senders to remain anonymous.
The practice exploded in popularity. The British public sent half a million cards the year after the stamp's invention. Valentine's Day had become a phenomenon.

OUR FAVOURITE VALENTINE'S ALTERNATIVES
St. Dwynwen's Day, in Wales, sees men give their ladies hand-carved wooden "lovespoons." In Romania, on February 25, young men and women search for spring flowers in the snow. The men chase the women back to their villages and kiss the ones they love.
Our favourite alternative is the Chinese celebration of Qixi. The Chinese celebrate this day on the seventh day of the seventh month of their lunar calendar. Qixi celebrates the doomed love of a farmer and a fairy seen as two stars separated by the Milky Way.
These are only a few of the many alternatives to Valentine's Day. The fact there are so many shows we can express our love more than once a year.
If you decide that you would like to give something to a friend, a mother or a lover this valentine's day you are in the right place. Explore our beautiful range of valentine's jewellery to bring some love and luck to someone very special.